Rural and poor, Mingo County has the fourth-highest prescription opioid death rate of any county in the United States.

The trail also weaves through Wyoming County, where shipments of OxyContin have doubled, and the county’s overdose death rate leads the nation. One mom-and-pop pharmacy in Oceana received 600 times as many oxycodone pills as the Rite Aid drugstore just eight blocks away.

The unfettered shipments amount to 433 pain pills for every man, woman and child in West Virginia.

“These numbers will shake even the most cynical observer,” said former Delegate Don Perdue, D-Wayne, a retired pharmacist who finished his term earlier this month. “Distributors have fed their greed on human frailties and to criminal effect. There is no excuse and should be no forgiveness.”

The Gazette-Mail obtained previously confidential drug shipping sales records sent by the U.S. Drug Enforcement Administration to West Virginia Attorney General Patrick Morrisey’s office. The records disclose the number of pills sold to every pharmacy in the state and the drug companies’ shipments to all 55 counties in West Virginia between 2007 and 2012.

The wholesalers and their lawyers fought to keep the sales numbers secret in previous court actions brought by the newspaper.

The state’s southern counties have been ravaged by a disproportionate number of pain pills and fatal drug overdoses, records show.

The region includes the top four counties — Wyoming, McDowell, Boone and Mingo — for fatal overdoses caused by pain pills in the U.S., according to CDC data analyzed by the Gazette-Mail.

Another two Southern West Virginia counties — Mercer and Raleigh — rank in the top 10. And Logan, Lincoln, Fayette and Monroe fall among the top 20 counties for fatal overdoses involving prescription opioids.

Mingo, Logan and Boone counties received the most doses of hydrocodone — sold under brand names such as Lortab, Vicodin and Norco — on a per-person basis in West Virginia. Wyoming and Raleigh counties scooped up OxyContin pills by the tens of millions. 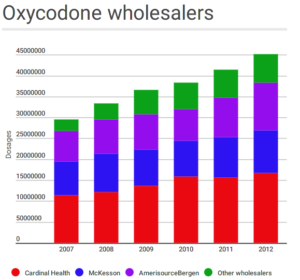 For more than a decade, the same distributors disregarded rules to report suspicious orders for controlled substances in West Virginia to the state Board of Pharmacy, the Gazette-Mail found. And the board failed to enforce the same regulations that were on the books since 2001, while giving spotless inspection reviews to small-town pharmacies in the southern counties that ordered more pills than could possibly be taken by people who really needed medicine for pain.

As the fatalities mounted — hydrocodone and oxycodone overdose deaths increased 67 percent in West Virginia between 2007 and 2012 — the drug shippers’ CEOs collected salaries and bonuses in the tens of millions of dollars. Their companies made billions. McKesson has grown into the fifth-largest corporation in America. The drug distributor’s CEO was the nation’s highest-paid executive in 2012, according to Forbes. 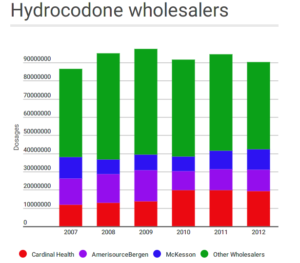